Grammar software is like taking a photograph, clicking watercolor rendering in Adobe Photoshop, and calling it artwork. Never mind all those years of practice, study, endless sketching, classes, books, museums—and most of all the longing and passion to improve your art.

Grammar software will not make you a better writer because it doesn’t know how. It’s a robot. I recently tried to read a work of fiction by a self-published author but was so wearied I could not finish the book. No matter how intriguing the theme, four hundred pages of stilted excess that should have been two hundred pages will exhaust the reader. How many times does a writer have to say the same thing using slightly different wording in each sentence? And after the third or fourth “her and Steven hadn’t taken a movie in years…” I could take no more. It felt like homework.

How many times do you need to say “that”? I have changed names and words in the following example but have left the verbose structure. It is not my intent to single out any writer—lack of restraint is a common trend.

“He knew that the more hurtful that something was the more someone felt driven to act as though it wasn’t, but he had thought that Sarah might be different. He had always believed that his wife had arrived at some highly evolved approach to life which had made her immune to the usual humiliations of the world, but now he saw that the differences between them…”

How can software recognize bloat? Only the writer has the power to make his or her work interesting, and it’s done by editing.

I looked up a tutorial for a popular grammar software program called Whitesmoke. The video guides you through a sample text and explains why you really need these computer-generated revisions. Whitesmoke is a good name for this program, because that’s what it is—expensive smoke. 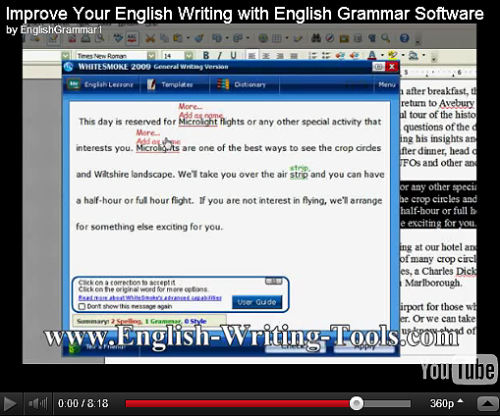 The text in this tutorial reminds me of the poorly translated assembly instructions that come with your new TV cabinet made in China. The grammar software suggests inserting a comma after “air strip,” but completely misses much more obvious and urgent mistakes in the last sentence: “If you are not interest in flying, we’ll arrange for something else exciting for you.”

Here the software is asking if the user wants to add the placenames to the spellcheck dictionary. Big woot. But look at the last sentence in the first paragraph, “This night is on your own in Marlborough.” The robot apparently has no way of knowing what a very bad sentence this is.

The second paragraph begins with “After breakfast, we’ll drive to Heathrow airport for those who need that.” Um, Mr. Robot, you don’t sense a problem here? First, Heathrow Airport should be capitalized, and second, “for those who need that” is just awful. Just about anything would be better. Whether you understand why isn’t as important as simply feeling it.

Algorithms cannot replace imagination, knowledge, experience, and intuition. Software will never be a substitute for learning how to construct a sentence.

I wonder what would happen if you ran Ernest Hemingway through grammar software. Would it “fix” it?