The Bane of a Traveling Companion

Nothing brings out the savage in generally easygoing people like being cooped up in a tiny car/motel room together for a week. On a recent road trip with J, we lurched between arguing and not speaking at all, highlighted by a full-on brawl at 1 a.m. in a rest stop off a California highway that resulted in me refusing to get back in the car.

Money
The biggest issue, as always. The cash we brought lasted a total of two days and the rest of the trip was financed with a credit card. Two fill-ups a day at $4 a gallon equals about $90. A day. Just for gas. Add that to one type-A and one type-B personality, just for fun. 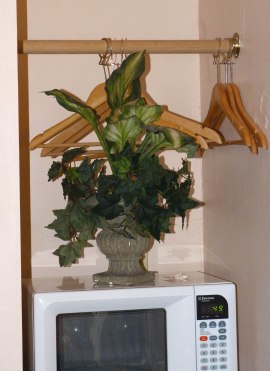 Motels
We sought the cheapest, sometimes sneaking the dog in. Our last stop was out of weary desperation in a crowded city. First thing I do is check the bathroom—the toilet water was level with the top of the bowl. A few flushes confirmed a considerable clog. J went to report to front desk. They actually said, do you want a plunger? Another motel had a broken air conditioner (fan worked but no compressor kicked in) and when we told the manager he helpfully clarified: Work fine! Look, hot air outside, cool inside! Why do people want to be in the service industry? And why, why, why, can’t they install a few clothes hooks, especially in bathrooms?

Showers
We’re all built basically the same—head, torso, legs, feet. So how the hell does the languid descent of water droplets from some lame shower three feet above my head reach anyone’s anatomy? What am I, a gymnast? I want a bath, or at least some kind of unit on a hose you can take down. I gave up after a few nights. I just don’t get the whole American shower obsession. The water is going in the wrong direction.

Food
I generally don’t eat much, and lifestyle stress, lack of money, and cleaning houses keeps my weight stable. J decides to go on a junk food binge. It’s impossible to resist when two feet away. I not only gained weight and got stomach cramps, but the steady input of oil and fat combined with long-distance driving acted as an irrigation system that germinated, then ripened a bumper crop of zits. And not just on my face. I don’t want to talk about it.

Peeing
I gotta pee. I drink a lot of fluids and it’s my biological heritage to quickly process and release, passed down from my mother. I hate restrooms, they’re usually disgusting and women are pigs. I’d rather go on the side of the road, and seven years in Arizona has emboldened me even further than when I lived in wooded areas back east. I’m happy with a cactus for a screen, or even a tumbleweed, if nothing else the open car door is enough. I stopped caring long ago if someone sees me peeing. When I have to go, I have to go. When I’m traveling by myself, it’s never an issue. I am armed for god’s sake and you’d have to be an idiot to not see someone coming toward you. But traveling with a man, all of a sudden it’s “someone will see you.” Stop the fracking car, now.

Temperature
When traveling alone, dealing with my broken personal thermostat from hot flashes isn’t a big deal. Open the window, shut the window. Turn on AC, turn off AC. But this brings out the berserker in a man. Guess I can’t blame him.

Sex
What is it about crappy motel rooms that makes men want to have sex? Here I am calculating with dread the next minimum payment on the Visa, they’re having some sort of tailgate party in the parking lot, the AC doesn’t work, the dog refuses to eat, I’m bloated as a dead jellyfish, haven’t shaved my legs in days, and I have a painful lesion in my mouth from the disgusting amount of potato chips I’ve been stuffing in. His snoring has kept me awake for the past three nights and we’re close to a combat situation. I’m about as sexy as a coldsore. So back off, buddy.

TV
For the millionth time I wonder how anyone can stand TV. There may be no microwave, fridge, working air conditioner, or bathtub in these shabby rooms, but the damn TV works fine, doesn’t it? TV is agony. We brought a laptop but the volume’s not loud enough and the wifi connections are so bad you spend most of the time drifting in and out of service. The lightbulb is too dim to read by. All I want to do is sleep but that would be too easy.

Radio
Disc jockeys should have their vocal cords cut.

The best trips I’ve ever taken were by myself. I love to talk to strangers. After five minutes you can walk away. You?